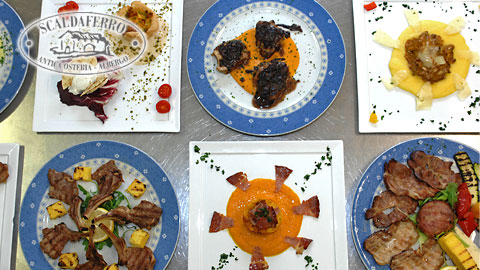 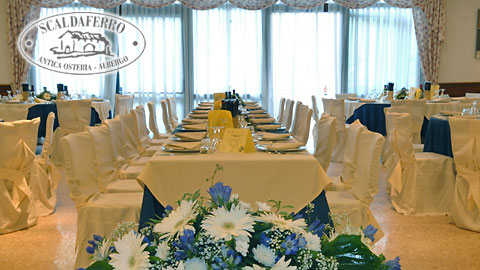 Via Scaldaferro 3, Sandrigo
Tel. 0444 462186
Web www.osteriascaldaferro.it
email This email address is being protected from spambots. You need JavaScript enabled to view it.

L'Osteria Scaldaferro has spacious rooms that can accommodate any type of convivial, with a focus on the wedding.

The chefs at Osteria offering cuisine from Vicenza, sometimes revisited and enlivened by new and surprising combinations.

The pasta dishes are the highlight of the Osteria where you can taste the traditional flavors of the culinary tradition of our territory with pasta made exclusively by hand: bigoli the duck, noodles, ravioli, gnocchi and more ... not to be missed are in fact the risotto of the season!

The meat dishes are the pride of the Osteria, especially the venison cooked country scrupulously following the old traditional recipes, jealously guarded and handed down from generation to generation, such as the famous Rabbit in Sour. Certainly no shortage of the latter on the boards of the Osteria classic: the mixed grilled meat, rooster and pork on the spit, the chops and the cut of beef, boiled .... And finally there are only the delicious and wholesome homemade desserts such as pliers Vicenza, the apple tart and the cake of his grandmother.

For those who love good wine, winery run by Yari offers a selection of the most representative wines of the land: for a drink you can not put up a vintage Prosecco di Valdobbiadene Col Vetoraz or a sparkling wine from native grape Vespaiola DOC Breganze the Perlena With the winery Dovigo; among the white wines you may want to taste the wines from the indigenous Garganega grapes, like the scoundrel and Soave Montecrocetta Gambellara of the farm; among the red wines of the paper are distinguished by character finally the classic cabernet DOC Breganze Vicenza and the foothills of the winery Maculan (Brentino Mansion), and the Vineyard Two Saints (Zonta).