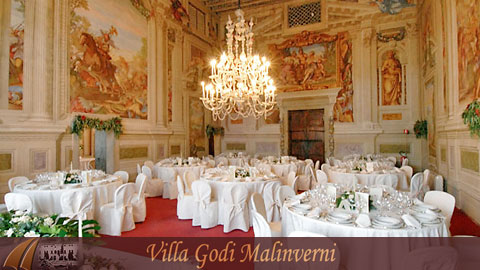 Andrea Palladio built the villa in 1542; Gianbattista Zelotti, Battista del Moro and Gualtiero Padovano adorned it with frescoes.
After having bought it in 1962, in a situation of degradation, Professor Remo Malinverni dedicated the last years of his life to renew its ancient magnificence. Together with the other Palladian villas, it was added to the Unesco World Heritage list in 1996.

The villa is open to the public for individual visits, groups and schools.
It is available for hosting conferences, cultural and social events. The barns have been transformed into a restaurant, Ristorante Torchio Antico.

The front facade of the Palladian villa is facing west. A staircase leads to the frescoed hall, overlooking two small terraces. You can observe the strong structure of the pillars that divide, supporting three arches. Above the central one there is the coat of arms belonging to the Godi family represented by a rampant lion. To the left of the Villa a small portico surmounted by a second floor. The right wing houses the guest house and conference hall. The plan of the Villa is very simple: a loggia and the central hall divide the main floor into two perfectly symmetrical spaces with four rooms on each side.

The pictorial decorations in Villa Godi Malinverni came prior to the period of frescoes, which was soon to be happening in many of the sixteenth century Venetian villas. To achieve this were three artists: Gualtiero Padovano, Gianbattista Zelotti, Battista del Moro. The nine frescoed rooms are all open to the public, in addition to the entrance loggia with frescoes by Padovano.

The park belonging to this venetian villa Godi Malinverni, with its century old trees and 2600 meters of boulevards, date back to the previous century and was rearranged in 1852 by Count Antonio Piovene who commissioned new designs from the architect Antonio Caregaro Negrin. In the center of the park there is a lake with swans. Where the plants are thickest is the Remembrance Corner, dedicated to the loved ones who lived in the villa, and their names are engraved on small cylinder or pyramid shaped columns with captions by Fogazzaro and Zanella.

Behind the villa are the Italian gardens with basins and fountains, fifty or so statues and columns by Marinali and Albanese. These gardens date back to the 17th century and the beginning of 18th century. Other small gardens are located in the back of the Palladian villa, near the exit of the 16th century kitchen and the entrance to the Fossil Museum, as well as in front of the guesthouse.